Very happy to tell you that I won my second Maryland Individual Artist Award, this time in poetry (the last one was fiction some years ago.) I submitted fifteen poems (the max allowed) that ended up in “Mustard Seed: A Collage of Science, Art and Love Poems.” Also, Beltway Poetry Journal named it one of ten best poetry book in 2016.

In honor of Mother’s Day, here is a poem from my book that I wrote for my grand daughter when my daughter-in-law was in labor.

That day I wanted to write you a poem,
a villanelle, ghazal, pantoum,
even just a haiku.

I wanted rippled syllables,
rhyming words to squeeze into lines
and spill over when they ought to.

But that day—
there was no language, not even alphabets
for the journey you were taking.

So, I offered you my memory
of your father’s birth,
his twenty-hour journey into a world

soon to be yours.
I offered you what I couldn’t
offer him that day—

before you turned the first page.

And here she is now: 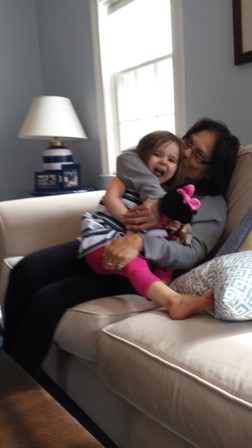 This is a test.

The birth of a new star in my firmament (see earlier post, A New Star) ─ my first grandchild ─ has taught me that I’m a dummy when it comes to love. This little baby was my screen saver, and I used to talk to her, even kiss my computer,  as her sweet pictures faded in and out.

But when I took the train up to see her, I noticed something different. I started to gaze at my son ─ how he held his child’s tiny frame, one hand cupping her little bottom, the other like a cap over her head while she rested against his chest. He’d bow his head, almost in prayer. I watched him change diapers, hold the bottle as she drank her mother’s milk. I listened to his tender voice when she belted out high decibels of unhappiness. And his own helpless face, as he whispered, “you’re okay, you’re okay,” like a chant.

One especially frustrating day, he turned to me, and said, “She doesn’t know how to soothe herself, Mom.”

I nodded. I looked away.  And do you know to soothe yourself, son? I wanted to ask, but didn’t.

Sometimes, his face went through a plethora of transfigurations ─ helplessness, frustration, anxiety, despair ─ until something no one could decipher, would happen and she’d stop! Then, his eyes would light up like the North Star, his laugh rattled the eaves, and the wind rushed in through open windows.

Let me say I was no good at soothing myself when my children were babies. And now, I’m worse when I watch my child and grandchild unhappy. But, in one sense, it’s comforting to not even try. I’d seen my mother pace the hallway at 2 a.m. while I was trying to nurse her grand son. Life is simple that way. It’s either feast or famine. It’s either a new moon or a full moon.

Watching him watch her ─ it’s scary ─ this thing called love ─ that stretches beyond the edge of the earth, and is reborn over and over.